We've mentioned before that WiFi 6 can handle more devices than any of its predecessors, but how exactly is this possible? The answer lies in OFDMA technology, a key feature that helped take device handling to a whole new level. 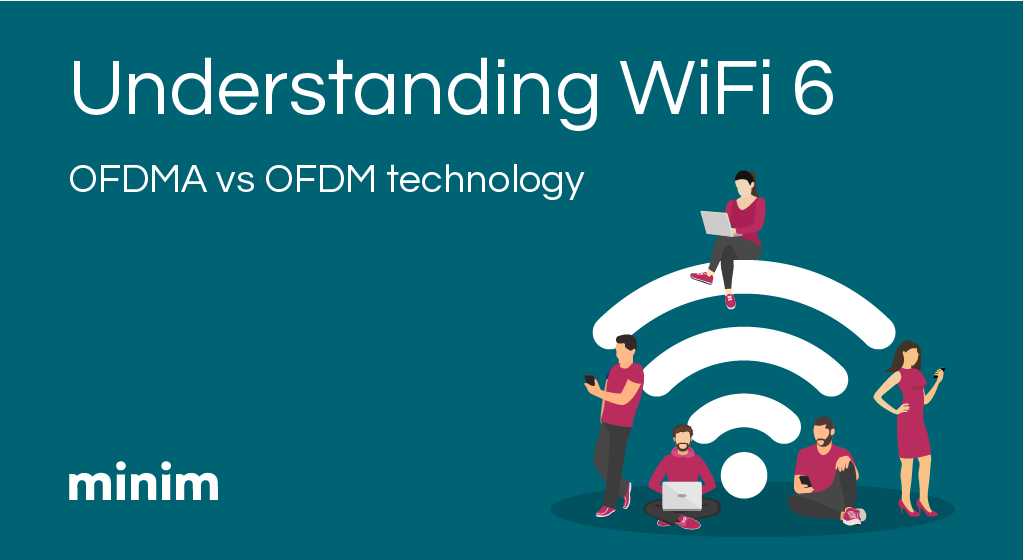 Part of understanding the value of OFDM and OFDMA technology comes from realizing how they optimize WiFi channels. These channels are important because they allow us to keep any devices on the same network separate with designated frequencies, preventing signal interference and helping you to achieve the most streamlined network experience possible.

Before OFDM came traditional FDM (Frequency Division Multiplexing), a far less-developed technology that required any signals carrying data to be spaced in such a way that frequencies did not overlap. There were even empty spaces—  guard bands—  placed between frequencies to ensure there was no contact, but this relied on a much wider range of frequency with far less usability.

OFDM is the method by which these frequencies are placed more strategically, helping wireless access points differentiate data transmissions over channels. With OFDM, signals can overlap with each other as long as it's at just the right spot (as seen in the image above). While one signal is at its peak, the other signals are at their zero-point, allowing the receiver to differentiate between each signal. This technology has made it possible to pack more data into a lower range of frequency.

Consider the receiver to be like a barista in a coffee shop. With previous technology like FDM, the barista could only handle one customer inside of the cafe at a time, forcing the other customers to wait outside to prevent overwhelm. With OFDM, on the other hand, the barista can handle a line of people coming into the coffee shop at once, also allowing them to stand more closely together,  take their orders sequentially, and use the space more efficiently.

It’s important to note that OFDM technology isn’t a function that’s specifically designed to increase speed. Rather, faster speeds for devices sharing a single channel is a consequence of its efficiency. The organized traffic over signals helps to reduce conflict between devices. Put simply, letting more people into a coffee shop doesn’t mean that the barista is physically capable of making a single coffee faster; handling a more efficient queue of orders can end up giving customers their coffees a little faster, though.

Even though OFDM helped receivers efficiently separate each signal, the lingering limitation is that wireless access points can only process one user's data transmission at a time for each channel. Basically, if multiple users are on one channel, each one has to wait its turn. Thankfully, OFDMA in WiFi 6 has introduced a solution to this issue. 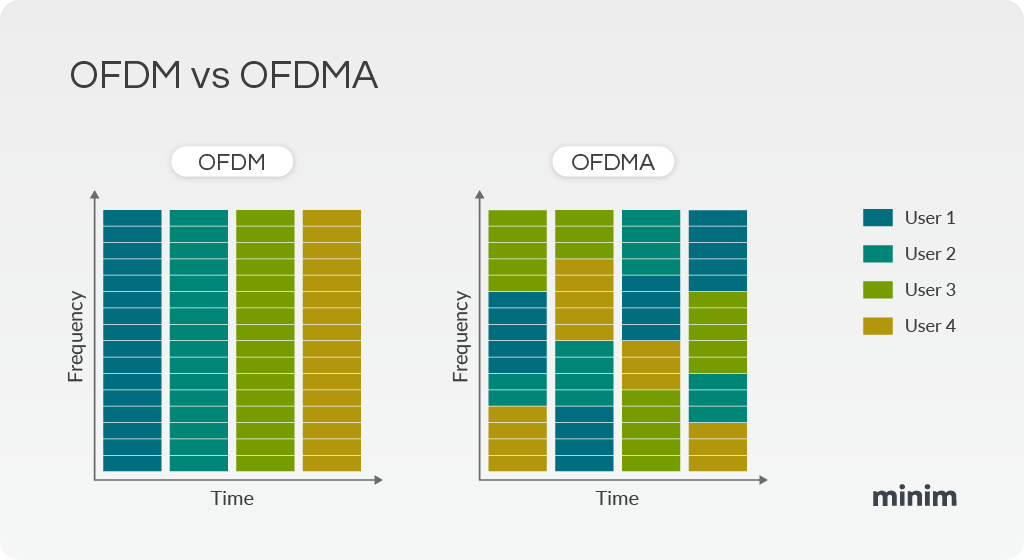 OFDMA is the latest implementation of structuring data transmissions with a new innovation. It takes the traditional channels of OFDM and subdivides them into smaller channel sections, carrying data through resources units (RUs). Even a 20MHz channel can split itself into sections to be shared by up to nine simultaneous users as long as the access point utilizes the smallest possible resource units. The access point then schedules the units to make sure each one is processed efficiently and with minimal conflict. Even better, this works for both downlink and uplink connections.

Sticking with our coffee shop analogy, think of the frustration you feel when there's several people in front of you and you know waiting for their orders is going to slow you down. OFDMA is like the introduction of mobile ordering, allowing the barista (your wireless access points) to strategically handle multiple orders simultaneously and better satisfy customers. It's a way of quickly creating a timetable of several orders at once and making sure that everyone gets their coffee in a timely fashion.

What's really cool about resource units is that the access point is able to customize each unit's size depending on the data load that needs transferring. It achieves this by quickly evaluating each device and what it's trying to perform at every data transmission opportunity, which means it's constantly optimizing based on your network's needs.

There's even a mode for limiting a device to only taking a 20MHz channel. This means it's great for small background IoT devices that spend most of their time on standby like doorbells or voice assistants. But OFDMA is smart enough not to just allot the whole channel to the device. It still subdivides the channel and only allots those devices just the amount of frequency it needs to perform and sets the device's maximum allotment at 20MHz. Pairing this functionality with WiFi 6's Target Wake Time will make this generation of wireless networking the most efficient ever in terms of power for IoT devices.

Normally, we don't think of device restriction as a good thing, but this is more than just a move for power conservation; some sources speculate that this will require less complicated, less costly chips for IoT devices since companies will no longer have to worry about catering to more than the 20MHz channel. It's a win-win for manufacturers and consumers.

Note that OFDMA does not replace MU-MIMO, and they can be difficult to differentiate from each other since they both function to assist multiple network clients at the same time. The main difference is that MU-MIMO uses spatial streams to physically direct signals and separate clients while OFDMA subdivides only a single channel. Because of this, OFDMA is effective for low-bandwidth, low-demand processes like simple social media surfing or small IoT devices; MU-MIMO is preferable for high-bandwidth activities such as content streaming and heavy downloads.

In other words, even though OFDMA is running a successful coffee shop and handling multiple simultaneous orders at once, every team of baristas has its breaking point; there's a certain limit at which it's more efficient to start referring customers to a neighboring store (spatial stream) to make sure customers feel satisfied.

There are limitations to this new technology, but they're not very extreme. Resource units are broken into fixed, specific sizes. For example, in a 20MHz channel they can only be split into one-half the size of the channel, one-fourth, or one-ninth. Moreover, a user can only be assigned one resource unit per transmission at a time. This means that even if the data you're sending would be a perfect fit for both one-half and one-fourth of a 20MHz channel simultaneously, you're still only going to get one-half for that transmission.

It's also important to remember that just because your access point is WiFi 6 compatible, it doesn't mean all your devices are. Any devices that are using WiFi 5 or previous will still be using the traditional OFDM technology that doesn't divvy up the channel.

More information on OFDMA vs OFDM

OFDMA is a brilliant innovation in WiFi 6 that pairs extremely well with the other expansions on multi-client service capabilities. For an excellent explanation of OFDMA technology with visual aids, see Devin Akin's video from Extreme Networks.